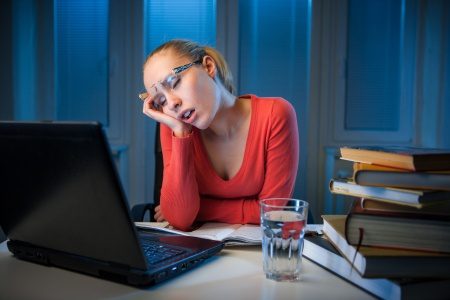 Anxiety and procrastination are two things which seem to be totally linked. When i speak to anxious people they will often mention problems with getting stuff done.

Of course, we all know what procrastination is like (who hasn’t gotten hooked on Game of Thrones or searching through GIFS when we should be working/studying/doing life admin).

But, if procrastination is getting in the way of you achieving your hearts desires, getting good results in your studies, or worse, it’s actually CAUSING more anxiety, then it’s time to get some help for the procrastination.

I know the feeling of procrastinating all too well. That sweet relief when we decide to ‘do it tomorrow’. A temporary freedom from having to do something which is difficult, boring or scary.

In the past, I’ve been one to start a day with big, BIG plans and goals, only to end it with a sparkling clean house, a jumpin’ Facebook page and an unfinished to do list.

This is often following by horrible feelings of worthlessness, guilt, frustration and anguish over all the things we should have been doing instead.

It’s not entirely known what causes procrastination, but there have been links with low self belief, low self esteem and fear (of either failure…or success).

A couple of years ago I was on the brink of taking some big, (scary) steps in my career, but I kept putting things off and holding myself back.

I was letting a constant stream of ‘busy-ness‘ get in the way of the things I really needed to get done.

I was letting fear hold me back.

‘What if I’m laughed at?What if I get it wrong!  What if everyone hates me?!’

I had a strong fear of failure, but not only that, I feared success even more.

‘What happens if I can’t sustain the success, or it’s too much hard work and I end up burned out and miserable?’

However, recognising these fears firstly was what helped me to move past them. I started to see them for what they were, called them out and made a decision to notice the fears but to move forward with my plans anyway.

Click to Tweet —> The truth is that taking action is the best cure for fear. When we take action, we prove to ourselves that we can handle the situation and our confidence grows and grows.

It’s tempting to want to start the day with a few easy tasks to ease ourselves into the day gently.

This is a BIG mistake! HUUUUGE!

Instead, productivity guru Brian Tracy says we need to ‘Eat That Frog!’

By this he means we need to ‘eat’ (do) the ugliest frog (most difficult/annoying task) first.

By doing this, we super-charge our self esteem and set a strong precedent for the day.

Winning at a difficult task early on increases your momentum, motivation and confidence and inspires you to get on with other tricky stuff too.

So instead of starting your day with a leisurely snoop around social media and low level email tasks, start it by making that difficult phone call or tackling that nightmare spreadsheet first thing.

It could transform your day and you’ll be less likely to procrastinate.

Tim Ferris suggests we also do the simple task of making our bed in the morning; it’s a small achievement that leads to bigger achievements throughout the day.

These are ultimate distractions (not to mention anxiety provokers).

If I don’t keep myself in check, I’ll cruise social media or emails several times an hour. Each time we do this, we waste time and it takes a while to get back on task.

There’s a reason Instagram is so addictive. For our brains, checking social media is like a drug; as Daniel Goleman discusses in his brilliant book ‘Focus’.

He points out that checking emails and Facebook can be mentally addictive since it sets off the reward mechanism similar to that of a person taking cocaine.

It’s a little ‘hit’ of information whether it’s Kardashian-gossip or a sensational news story that keeps us logging in when we should be getting on with other things.

To avoid this, turn off the Wifi on your computer while you work, stop notifications from being ‘pushed’ to your phone or use an app like “Anti Social’ to block certain websites between certain times.

Before you begin your day, visualise and mentally rehearse in your mind how you’d like it to go.

See yourself getting on with things with focus and confidence. Visualise things going well and the good feelings associated with that.

See yourself enjoying some relaxation at the end of the day, feeling proud of yourself and knowing that you made good progress that day.

When we imagine things that same parts of our brains are activated as if they were happening for real, so it’s great way to prepare your mind for success.

Often we’ll make excuses about ‘not being ready’ or ‘not being good enough’ which prevent us from getting on with things.

Maybe you tell yourself you’re not ready to give that talk, or not good enough to start going on dates or to begin yoga.

Everyone has to start somewhere and you’re almost guaranteed to get better at it once you actually…..get……started.

Richard Branson says ‘start before you’re ready‘ – you just need to start and then trust that you WILL get better as yo go along.

When you procrastinate out of fear of failing, you’re ensuring you automatically fail. Those shots you don’t take? You lose them all.

Remember, there is no shame in failing!

Ask any successful person and they’ll tell you all about the numerous failures they’ve had. It’s all a natural part of the process of doing stuff. Failure is inevitable, at some point.

You are here to learn and grow as a human being, not to be an image of perfection.

Try and fail, learn lots…. and try it again. Don’t let perfectionism get in the way of good.

Often, we’ll procrastinate because the things we’re trying to do just seem too damn big and scary.

However, David Allen, author of ‘Getting Things Done‘ suggests that instead of trying to do too much at once, we should instead break things down into teeny-tiny steps and just do one small thing at a time. Also, setting a time limit on it makes it seem even more manageable.

For example, if you’re looking to start running, think about the first little steps that you could take. Maybe going for a 20 minute jog alternated with walking, or spending 20 minutes researching running clubs, or arranging to buy some new running gear.

Small steps add up to big ones and you’ll grow your confidence and self belief in the process.

I put things off a lot less when I schedule everything hour by hour for the day.

A surprising amount of time can be wasted trying to decide what task to do next, or just taking little cheeky breaks all too frequently.

When I schedule tasks in, I know exactly what I’m doing and when and I schedule breaks in too. It’s a plan that;’s simple to follow, and it removes decision anxiety.

This technique involves getting an egg timer (or timing on your phone) and timing yourself for 25 minutes of solid, uninterrupted work.

Having something ticking on your desk can really focus the mind! (Of course if the ticking bit makes you anxious, use your phone timer instead).

Then give yourself a 5 minute break before moving on to the next 25 minute block of work.

Which of these tips will you be trying out? Do you have any other procrastination tips for us? We would love to hear them!

Let me know in the comments (and please share this with a fellow procrastinator who may need it!)

6 Ways to Manage Anxiety at Work

Anxiety at work is incredibly hard to deal with. You're in the bathroom, dapping cold water on your face with a tissue. You thought about having a little cry in the toilet cubicle but you can't bear the thought of going back to your desk and seeing your colleagues...

Ep 165. The Power of Hypnotherapy

Join The Calmer You Collective monthly membership https://calmer-you.com/collective In this solo episode I'm talking about: How I discovered hypnotherapy and how it worked for meThe top myths about hypnotherapyHow hypnotherapy could benefit you